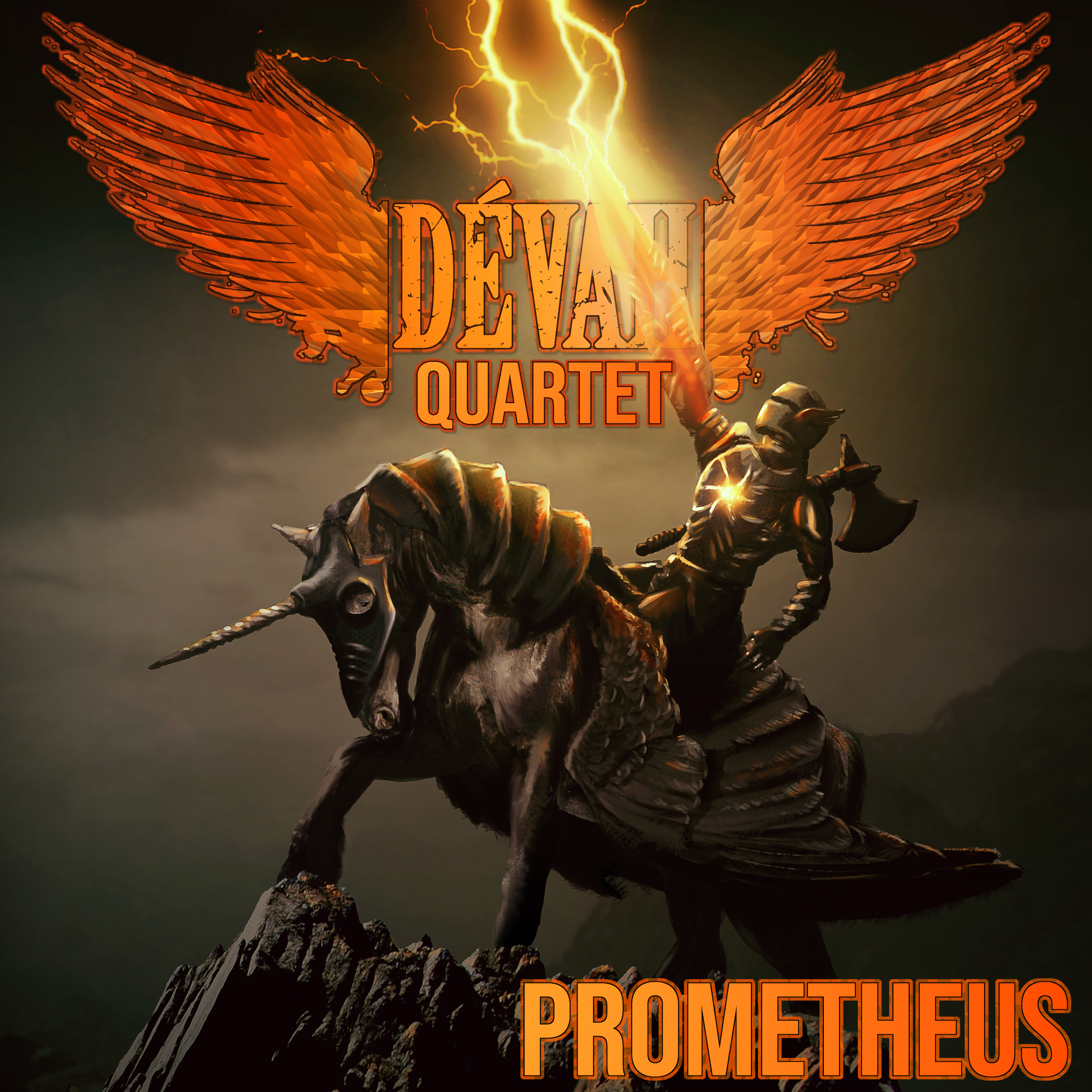 An independent double album of progressive rock, explained from start to finish.

I've been working with Dévah Quartet since late 2018. It's a funny story how this started. Basically, in my hobby/avocation as an independent music producer, I have not gained much traction despite exec producing a couple of well-received albums (The Defiant Machine and The Undiscovered Country). The latter of those was based on an original story I wrote about an artificially intelligent android soldier who lives through the far future. I truly enjoy the process of creating new music that tells a story, which brings me to late 2018. I was looking at options for my next project, and I happened to listen to an interpretation of RUSH's 2112 for acoustic strings by Vitamin String Quartet. That got me thinking about 2112, and I went on YouTube looking for "string cover of 2112." Dévah Quartet popped up with their partial 2112 medley, and I was blown away. But I thought to myself: "where's the rest of it?!" I reached out to the band and asked exactly that. Then I started listening to their catalog on Apple Music and I realized just how talented this group is. Oh my god, they are amazing...the real deal! So I asked Liza (the leader of the group and main composer/arranger) whether her group might accept a commission to arrange the full 2112 suite for electric strings in their style. Of course they said yes...several of the band are RUSH fans, especially drummer Mackenzie Longpré (Neil Peart is his idol). So they jumped at the chance. Over the following approximately seven months, I worked closely with the band on the project and the result was the 2112 album. These ladies and Mack poured every ounce of their musical ability and passion into 2112, and the results speak for themselves:

Yeah, that's freaking amazing. I'm glad I filmed that for posterity because there are stunning moments in that recording/performance. RUSH fans love it. But it's not just 2112-- there is a whole 20-minute original epic song on there called Heaven and Hell, which is based on an original story I wrote about a soul's journey from Hell to Heaven. We recorded the 2112 album in June 2019 and released it in September 2019. The reaction was so positive that I thought: let's do this again!

As I was walking down the street on October 1, 2019, I had a vision: a tormented genius saves the world from a killer asteroid using his mental superpowers. I wrote the titles for the seven parts on that same day, and I sat down to write the full story on October 3, 2019. At that point, the seven-part original story Prometheus poured out, with the elements of the story coming from the ether and seemingly being beamed into my head as I typed them out, almost involuntarily as I watched the words appear on the screen:

The story came out like that on the first attempt, and I wrote it over the course of a day in basically one sitting. I don't know where these things come from, but I'm not complaining. Anyway, I sent this to Liza and her sister Sam that same day, inquiring if they liked it and would be interested in doing another album. They loved it! This would be a sister project composing the epic song as well as the vocals (Sam is an outstanding vocal composer and singer). Initially it was just going to be Prometheus plus several original pieces, but then right when the COVID-19 pandemic started, I had another idea. This other idea was to tell the story of Joan of Arc-- the point being, these are both stories about being "chosen" for something great, which is unclear to the person who is chosen but clear in retrospect. A recurring theme in my life as something I want to happen. I ended up just outlining this second original story and giving it to Liza and Sam to complete:

I got really distracted by the pandemic and saving my primary business (lol), so honestly I wasn't paying much attention to this over the following year and a half or so. But then Liza sent me the MIDI files she had been working on this whole time, in January 2022 shortly before we were set to record in the studio. Wow, even the MIDI files were super cool. I got a great sense of the direction this was going in, and it's what I was hoping for.

Part of the challenge in any music project is setting up the actual logistics of the production. I am very fortunate to be assisted by Producer/Engineer Tim Gennert, who is a total professional and whom I have worked with since 2017 on The Defiant Machine project. Tim stepped up to go to Canada for this when I was unable to go due to my recent engagement and wedding plans. This ended up being a streamlined production without the planned filming, which I had been very excited about but which I would have spent a ton of money on that I simply cannot justify now that my career goal has shifted to public service. Prometheus may be my last music project for a long time, so we're making it count.

The awesome album cover is its own story. In 2013, I had a vision in my head of a dark knight on a unicorn Pegasus shooting a lightning bolt from a magic gauntlet. It's supposed to be the main character in my first screenplay, which is about a modern young woman who wields a medieval knight's magic gauntlet that is imbued with special powers for the worthy. I commissioned the piece from a talented concept artist named Andy Collis, and it came out amazing, just what I had imagined (Andy and I have done about 15 separate pieces based on my ideas, and they are all at this level). I wasn't sure what to do with it, so I turned it into a canvas print for my office and it is hanging in my office. But now I have a use for it, so I decided to use this one for the album cover. Here is what the original piece looked like, then the final album cover composed by yours truly in Photoshop:

That could be Joan of Arc. Yeah, we killed it.

You know what's cool? Getting videos of the band's rehearsals before they went into the studio. I felt like I was there, and it was very, very cool (Thanks Tim!). Check out these stills:

Day One was setup, as well as recording of an interpretation of Lateralus by TOOL. This one will be similar to the band's performance at a live show that I filmed in 2020, but will be even better with the studio quality recording and perfect performances. More stills:

A portion of Prometheus being recorded.

A portion of Lateralus being recorded.

When Tim got back and had a chance to start post-production, he generously invited me up to hear the assembled but unfinished album at his studio. It was awesome hearing everything on high quality studio monitors instead of my laptop. It's clear that the band, the studio, and Tim put a ton of work into this and really nailed it. There was not a single wrong note on the whole album. Everything was recorded "clean" without effects, which is a change from last time, so that we can put the effects in during post. That makes it much easier to get the exact effects we want, but at the same time it makes it harder to nail the recording because the players have to be perfect. Well...they delivered! Lol. I was blown away.

The maestro at work in his studio.

I exported a rough floor take from Pro Tools and assembled the pieces of each track to come up with a draft program for the album. The program ended up changing due to edits, so the final album is shorter. Here is the final program:

Yeah, that's great-- a double album. Prometheus will take up almost a full record by itself (we are definitely doing a vinyl release). We ended up shortening the Joan of Arc song to three parts, sadly-- but we made up for it with some awesome instrumental interludes. Although the whole album is amazing, the group's interpretation of TOOL's Lateralus in particular is basically the best musical performance I have ever heard in my life. Grain of Sand is a potential hit with very cool riffs, and I could see this getting played on local radio.

This was a tough one. Essentially, it was all perfect except for a couple of pops/clicks in Prometheus. I ended up remastering Prometheus in SpectraLayers 9 Pro, which is a brilliant, amazing program. Even then, it's not perfect because the pops appear to be from issues with Cubase, which was the mixing program Tim used. The problem is, no one else was hearing these, so I was having to convince myself they were real (lol). It's an improvement for sure; will document my process in the near future. I also went ahead and fixed the loudness issue in Heaven and Hell with SpectraLayers, and that turned out amazing. Not sure how I can re-release the audio on the 2112 album, but that might be possible.

Brought to you by Andrew G. Watters